The below children are currently awaiting sponsorship

Story:
​​Her mother became paralysed in both legs during this child’s pregnancy (can’t explain medically!!!). Mother was then sent way from the marital home. Her mother is now in a wheelchair and survives by begging.
Mary lives with her mother in an unfinished house that is being built and is unfinished. The owner is not living in the house.
Her mother came to Goshen school asking for help. 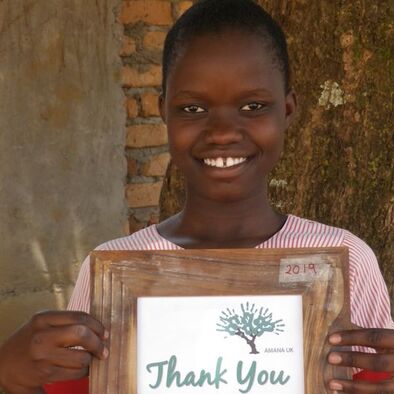 Story:
Faith has been at the school for 6 years. She has both parents and 3 siblings.Her parents are both HIV+. The family survive by farming in the village but rent a room in Soroti, so the children can go to school. Often, they do not have the money for school fees.
Faith is a very clever girl and has great potential. We want to help support her through school so she can look after her family and reach her full potential.

​Story:
Rebecca is from a family of 8 children. The family experienced a traumatic event when her father was killed when he was confronting the thieves that came on their land.
All the children witnessed this event and are very frightened. One of the elder children tried to help her father. The children are now staying with an aunt in Soroti. Rebecca's Mother has gone back to the land to continue to grow food and look after the animals. Her mother said “She will rely on the Lord for protection” as they have no other way of getting food.
Some of the Aunt’s children are already in the program and the younger children have been coming to school with them.

Story:
His father was killed in a road traffic accident with the eldest son. Mother now on her own with 4 children and she is suffering with a severe grief reaction.
Elvis and his siblings were brought to program by another parent from school as the family is in need of some help.

Please visit https://www.give.net/amanauk ​in order to donate towards our work